Posted by George Washington's Distillers at 12:33 PM No comments: 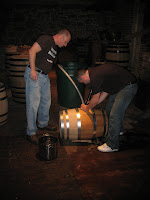 After three days of distilling, we have generated almost 50 gallons of apple spirit, which has been put into two oak barrels to age. The cider that we received from Distillery Lane contained roughly 6.5% alcohol; after the first run through the still it had increased to upwards of 20% (40 proof); after the second and final run the potency increased again to roughly 60% allcohol (120 proof). Given our plan to age the spirit for two years, Dave Pickerell decided that cutting it with water to reduce it to 100 proof would be best. When the time comes to bottle it will be cut again, probably down to about 86 proof.

The new apple spirit has a predictably strong flavor as well as a lot of heat because of the high alcohol content. But the smell and flavor of the apples is still there and is really very pleasant. The trick will be for the flavors to mellow a bit and gain in complexity from being in contact with the wood, without losing the residual character of the apples.

We also took this opportunity to taste some of the peach brandy we made last year, which has spent the last 12 months in oak barrels in our storage facility. Everyone pronounced it to be an excellent product, which should be even better after another year in wood, and we have every reason to expect that the apple brandy will turn out just as well. Our current plan is to bottle and sell the peach brandy in another year or so, with the apple brandy following one more year down the road. 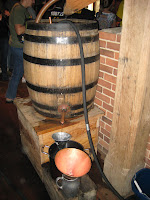 We picked up our barrels of fermented cider from Distillery Lane Cider Works on Thursday as planned. Ten barrels had achieved a level of about 6.5% alcohol -- our target number -- with another three barrels not quite there -- at 5%. We brought all 13 barrels back to Mount Vernon and filled one of our hogseahds with the immature cider in hopes that it might continue working. Even if it doesn't, the sight of the frothy liquid in our vintage 120-gallon oak hogshead makes a pretty picture and serves as a great demonstration piece for visitors while we distill this week. 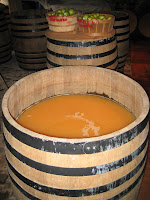 We filled all five of our stills this morning and by 12:30 we were beginning to see the first appearance of the crystal clear spirit. As of 4:00 most of the stills have just about completed their run and we are getting ready to close down for the night. Tomorrow we go at it again, and by the end of the day we should have all 500 gallons of cider run through and stored temporarily in the low-wine kegs. On Wednesday we will run that all through for the second distillation, and we hope to have up to 50 gallons of eau de vie ready to stow away in our toasted oak barrels to age.

Anyone interested in observing the process is welcome to come on down on Tuesday or Wednesday.
Posted by George Washington's Distillers at 1:11 PM 1 comment:

At long last, we will be offering bottles of our aged rye whiskey for sale to the general public beginning on Saturday, October 22nd.

The whiskey was distilled in the fall of 2009 at the reconstructed still house and has been aged for more than two years in charred oak barrels. Although George Washington did not purposely age his whiskey, we think that he would approve of the mellow flavor and pleasing appearance that this additional step has imparted to the traditional rye spirit.

Sales of the approximately 300 375ml bottles will start at 10:00 on a first-come first-serve basis and will continue while supplies last; the bottles retail for $185. The sales will occur at both the Gristmill Shop and the main Gift Shop at the Mount Vernon Inn Complex on the Mount Vernon estate.
Posted by George Washington's Distillers at 7:34 AM 5 comments:

Grinding the apples into pulp and then pressing it into juice are the two main steps in preparing for cider making. The folks at Distillery Lane Cider Works have adapted a bit of modern technology to assist them in this, with a motor driven conveyor and grater to speed up the grinding. The press also benefits from some labor saving features and modern materials, but it is essentially the same type of device that has been used for centuries. Known as a rack press, frames holding the apple pulp (or pomace) are stacked under the press plate, which then is hydraulically lowered to squeeze out the juice. The newly squeezed juice smells great, by the way, and it seems that wonderful aromas are one of the benefits of working in a cider mill. The juice then is transferred into barrels, yeast is introduced, and the fermentation takes place over a 7-10-day period. Rob thinks that our cider will be fermented and ready to be picked up on Thursday.

Posted by George Washington's Distillers at 8:20 AM No comments:

On another topic, a book that tells the story of George Washington's distillery and the Mount Vernon distillery restoration project, and focuses on the early history of the American whiskey industry as well, is now widely available for sale.

It can be purchased ($24.95) at the Mount Vernon shops or online at http://www.mountvernon.org/, or via Amazon and Barnes and Noble.

"How many of us knew that the young George Washington bought votes with free beer and rum punch? Or that the old, retired president's distillery pumped out 10,000 gallons of rye whiskey in a single year? Here's a toast to historian Dennis Pogue for excavating the intimate relationship between strong liquor and the strong man of Mount Vernon."

An Apple a Day ... or Actually, about a Thousand

We are back in the brandy making business. As I type, we are in the midst of preparations to distill a batch of brandy made from the same types of apples that George Washington used more than 200 years ago. This latest batch of spirit will go along with the peach brandy that we distilled last year about this time, and means that we will have made all three types of "spirituous liquors" that were produced at Washington's distillery.


We know from the plantation records that several different varieties of apples were grown on the plantation, both to support cider and brandy making and for household consumption. Three of those varieties were particularly amenable to cidering: Hewes/Hughes/Virginia Crab, Newtown Pippin, and Russet (very likely the variety known as Roxbury). As it happens, growing heritage apples is making a major comeback in the region, with several orchards focusing on growing the classic varieties for producing their new/old boutique ciders.


Tom Burford, author of the indispensable reference book, Apples: A Catalog of International Varieties, former professional orchardist, and apple consultant to Monticello and other historic sites, agreed to help us with our plans for this latest experiment in replicating the product of Washington's distillery. Tom put us in touch with Rob Miller, who runs Distillery Lane Cider Works, located just west of Frederick, MD, where all three of those apple varieties are grown.


Working with our master distiller, Dave Pickerell, and with the input of old friend Ted Huber, President of Huber Starlight Distillery, in Indiana, we concluded that a mixture of Hewes, Newtown, and Roxbury juice would give us the sugar potency we needed, and that 500 gallons of fermented juice should yield as much as 50 gallons of brandy. As with the peach brandy we made last year, the idea is to put the new spirit away in oak barrels for up to a couple of years to age before offering it for sale to the public.


Dave and some helpers are planning to come and spend three days working with Steve Bashore and the other members of our Historic Trades department in distilling the cider in the reconstructed Mount Vernon still house. Because fermenting apples in open-air containers can be dicey (lots of stuff floating around in the air that could complicate things!) we decided to let the folks at Distillery Lane ferment the juice for us. Once it is finished later this week, we will pick it up and transport it back to Mount Vernon for distilling next week (October 10-11-12). Stay tuned for updates on our progress.
Posted by George Washington's Distillers at 12:52 PM No comments: