The next offering of unaged rye whiskey will take place on April 14, 2012, beginning at 10:00AM. The 600 bottles (375ml at $95 each) will be available for sale only at the Shops at the Mount Vernon Inn Complex and at the Gristmill Shop. As in the past, the bottles are available on a first-come, first-served basis, and we cannot ship.
Posted by George Washington's Distillers at 12:22 PM 1 comment: 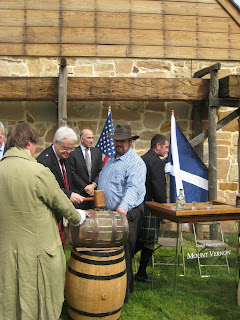 After three years in wood (the first two in reused bourbon barrels, and the third in a recycled Madeira container) the whisky should be ready to bottle. Current plans call for auctioning off the whisky to support a range of chariable organizations.
Posted by George Washington's Distillers at 11:40 AM No comments: 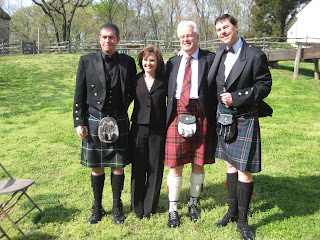 These three fine looking Scots -- decked out in their finest national regalia -- posed with Lisa Hawkins of the Distilled Spirits Council of the US after the barrel filling ceremony held at the George Washington Distillery on Wednesday. John Cambell, Andy Cant, and Bill Lumsden (pictured here, left to right) were joined by Robin Naysmith, Scottish Government Counsellor for North America, Gavin Hewitt, Chief Executive of the Scotch Whisky Association, and Mount Vernon and DISCUS staff and others, to top off the second barrel of malt whiskey that had been distilled over the previous two days.

Two @10-gallon barrels of the spirit were produced. One of the barrels was filled with the "director's cut" whisky, with a proof of 102, that was judged to be so good after the first round of distillation that a second run through the stills was not necessary. The spirit in the second barrel is the product of two distillations and is at 125 proof, the level at which Scotch distillers generally hope to barrel. A portion of the spirit in the second barrel set a new record for the GWD, reaching 165 proof! We wound up with only 20 gallons of spirit even though the yield from the first distallation was sufficent to provide more, because the Scottish distillers wanted to ensure that the finished product would be of the highest quality possible, and thus they elected not to redistill the lesser quality spirit.
Posted by George Washington's Distillers at 11:18 AM No comments: 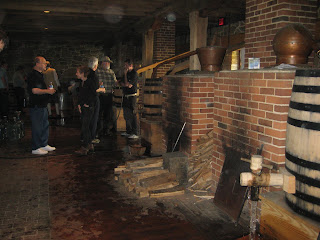 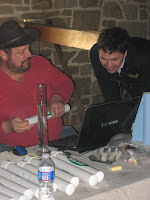 At left, distillers, journalists and hangers-on mill around the stills at the end of the first day's run. Roughly 80 gallons of distillate were produced, with about five gallons considered to be such good product (110 proof and clean as a whistle!) that it is being barreled as a separate "director's cut" and will not need to be distilled a second time. At right, Dave Pickerell and Bill Lumsden confer over the proofing results. Tomorrow we continue the second run on the remainder of the batch.
Comments from the Scots:

Bill Lumsden, "It's quite a thrill to be doing everything by hand."

John Campbell, "It's almost like stepping back in time to produce whisky the way it was done 300 years ago."

Andy Cant, "It's like you've got to unlearn everything you've learned; it's a complete unknown, but I think that's half the fun of it."

Posted by George Washington's Distillers at 3:28 PM No comments:

Our Team, Part II: Scottish Invasion, Plus One 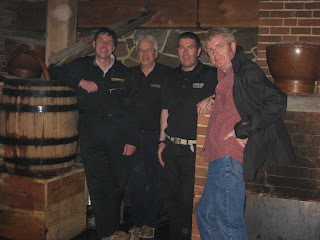 Our Team: Part I 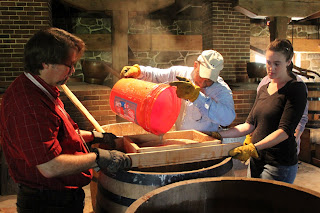 
In addition to the special grain, the mashing process for Scotch-style whisky entails some unusual extra procedures. Unlike our normal practice for mashing rye whiskey, the Scots don't like to keep the liquid and the solids (the spent meal that ultimately settles to the bottom of the mash tubs) together. They have found that separating the two well before distilling has another significant effect on the finished product. For us, this meant going through an additional series of extremely labor intensive steps. 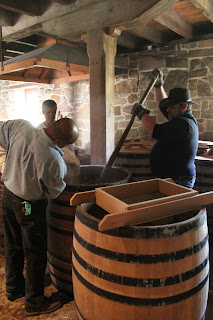 The process begins by combining 80 gallons of water heated to a temperature of 168 degrees with 280 pounds of barley meal in a 120-gallon hogshead, "rowing in" the meal as the water is added. After this concoction is allowed to site for about 45 minutes, the temperature drops about 20 degrees, and the liquid is bucketed out of the hogshead by hand and strained though metal mesh into a second hogshead, with the solids deposited into a third barrel. More hot water (about 32 gallons at 195 degrees) is added to the hogshead containing the strained solids, which produces additional sugar. The liquid in that barrel then is strained as before, with the solids discarded. The liquid is combined with the liquid from the first straining episode, and when the mixture drops to about 90 degrees in temperature, yeast is added to begin the fermentation. As with all whiskey, fermentation -- when the sugars are converted into alcohol -- should take three or more days to complete. 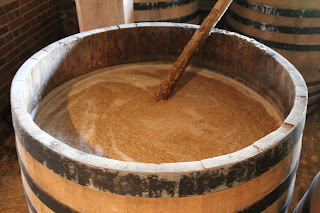 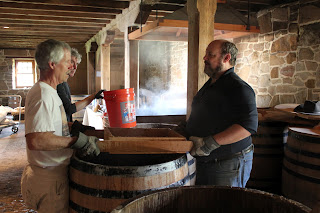 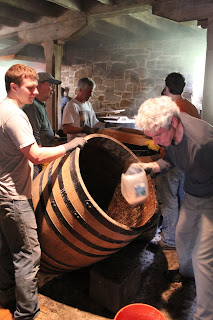 Posted by George Washington's Distillers at 12:03 PM No comments: